from the small village of Dharapani, up and over Larkya Pass, then to Manaslu basecamp, and finally back to Dharapani. We were only doing half of the circuit, as a landslide occurred the week before we arrived, killing four people, and blocking access to one side of the usual trekking loop. Our journey began with a 6-hour bus ride from Kathmandu to Besisahar. Unfortunately for us, all of Kathmandu was gearing up for Dashain, so there were tons of people traveling to get home for the holiday. For us that meant extremely crowded, hot, dirty, noisy traveling conditions. On our second day we would travel by jeep up a harrowing dirt road to Dharapani where we would FINALLY start the trek.

At an elevation of 6,100ft, Dharapani was a great place for us to start our acclimatization trek. Our first day of trekking was rather short up to the village Gho at 8,300 ft. We stayed in our first tea house and got a good night’s rest. Our second day was however quite long, as we trekked up to Bhimthung which is just over 12,000 ft. On our way to Bhimthung we stopped for lunch at tea house in Yak Kharka, Manang.

Because it was quite a bit warmer in the kitchen, Sean, myself, Pradip our porter, and Lambabu our guide were all sitting in the kitchen while the owner (Didi – what you call all women) prepared us lunch. To our surprise a box covered with a burlap bag sitting in the corner of the room began moving. Didi walked over to the box removed the burlap bag and out popped a chicken. The chicken had been in the box laying eggs but was apparently done. So Didi got out a plate, scooped a huge amount of cooked rice onto the plate, and put the plate on the floor so the chicken could eat. Once the chicken finished eating the rice, she shooed it out, as it had begun to hop onto of the kitchen counters. That day will forever be known as “Live Chicken in the Kitchen” day.

After lunch we trekked the remaining 3 hours up to Bhimthung. After Yak Kharka the trek got extremely muddy for a couple of miles before turning to cross a moraine. When I say mud I really mean 6 to 12 inches of thick, sticky, sh*t!!!!! Because this is a trade route, e 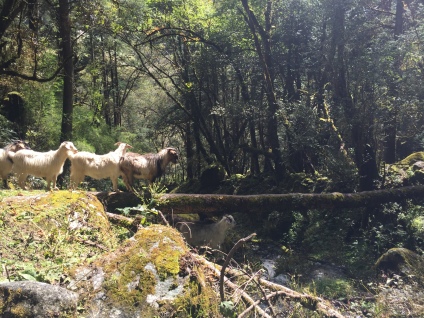 very animal that can haul/carry something, or can be eaten travels this path, so muck is a more accurate term. Sadly I fell into the muck and hit my head on a tree but we were near a stream. Luckily while cleaning up I was rewarded with a goat show! The goats meandered back and forth trying to cross the stream on a log. Why the goats didn’t just walk through the water is beyond me. It was shallow and slow moving, but they didn’t want to get their little feet wet. The trek up to Bhimthung was long and a considerable jump in elevation, so we rested the next day and just hiked up to Ponker lake. The lake afforded us great views of the glacial moraines and Bhimthung.

The next day we trekked for 12-hours; we gained and lost almost 4,800 feet of elevation over the course of 13 miles. Happily within that 12-hours we took almost 3-hours of breaks at different tea houses. We trekked up to Larkya Pass then down to the village of Samdo, which from a distance looked like an oasis. It had a three story tall “hotel”, a bizarre, and fields of yaks. Getting to the top of the pass proved to be pretty difficult as both Sean and I were feeling the affects of the elevation and some dehydration. It was only day 4 of our trek and we moved from 12,000 ft to 16,752 ft in just a few hours. But we did it and were able to sleep at 12,000 ft again that night in Samdo.

Samdo turned out to be not as great as it looked from a distance, with the food being a bit more expensive, less tasty, and the accommodations were smaller but adequate. So we moved on the next day to Samaguam, the village that supports Manaslu expeditions.

Samaguam turned out to be a wonderful village that’s quite large. With two distinct sections, the village is a blend of both old and new. There is also a monastery just above the village that is currently constructing a new temple to handle more puja ceremonies. The monastery site is also known as the retirement village. As people from the village age, they move into homes on the monastery grounds so they can be closer to the temple and pray everyday. Apparently when you get to be a certain age (60 or so) you need to start praying all day to attone for the sins in your life, so that you have a good afterlife/reincarnation. In cities, adult children will drop their parents off at a stupa in the morning, with a packed lunch and then pick them up after work. They literally spend the entire day at the stupa praying.

When we arrived in Samaguam, many of the expedition parties were coming off of Manaslu so most of the tea houses were full, but we were able to secure a room in a tea house that had a great cook and a hot shower. So after lunch, we took off for a walk around the village. Our guide Lambabu was able to walk us right into the home of a local family who offered us Tibetan Tea.

Of course I tried the Tibetan tea full well knowing that it was salty, but they had a pot of it on the fire ready to go. Thick and salty as expected! The village family didn’t know Lambabu but the Nepalese people are extremely hospitable and enjoy entertaining guests, particularly Westerners. The family was comprised of two daughters, a mother, and grandmother. One of the daughters was previously a Buddhist nun, who studied in India for 10-year. Now back in her home village, she was opening a newly construction tea house. The other daughter was married to the village Doctor, whom we saw on the trail the next day portering loads down from Manaslu basecamp. Both of the daughters giggled at me when I thanked them in my rudimentary Nepalese. It was a real treat to visit with local people and be invited into their home. It was a combination of old construction filled with modern day amenities (e.g. word burning stove with chimney next to the flat screen TV and cell phones).

The following day we made the hike up to Manaslu base camp, which is pretty long. Samagaum sits at 11,500 ft and basecamp is at 15,925 ft, and it’s roughly 4.5 miles round trip, so straight up basically. It’s 4-hours up and 2.5 hours down, so a pretty big effort. We started pretty leisurely around 8am and had great weather, however  2-hours into our hike Sean didn’t feel well; was dizzy and lightheaded. He hadn’t slept well in several nights and was likely just dehydrated so he and our porter Pradip turned around. Lambabu and I continued up and arrived at camp about 12:15 pm. Along the way we ran into Willie Benegas, our guide for our upcoming AmaDablam climb and he invited us to have lunch in what remained of his expeditions basecamp tents. So Lambabu and I were treated to an amazing meal and hot tea just shy of 16,000 feet.

After about an hours break and lunch, we started the 2.5 hour journey back to Samagaum which was uneventful except for sighting a family of the elusive Himalayan Blue Sheep. The next day we began our 5-day journey back to Kathmandu; lots of miles, muck, elevation gain, and crossing the nearly 17,000 ft pass in a snow-storm made the trek back out sporty. In the end, we cut two full days out of the schedule, so we only hiked for 10-days straight. We were able to skip over a village twice because we moved faster and further than we had scheduled. So we trekked for 10-day over 70 miles and literally tens of thousands of feet of elevation gain and loss. Not to be overlooked are the ridiculously long travel days when you’re driving. It’s easy to forget how exhausting and taxing those days are even though you aren’t physically doing anything.

I’m very proud of our effort. Our overall goal was to trek for a couple of weeks to acclimatize for our upcoming AmaDablam climb. We trekked up to 16,752 ft twice in one week and I touch 15,925 ft in that same week. Here are some trekking and animal photos. So arriving back in Kathmandu, we got a good shower and of course got our dirty laundry washed. I’ve said it before, but all our travel comes down to… where are we going to stay, what are going to eat, what are going to do, and where can we do our laundry. 🙂

Now we’re onto our next adventure, the little country of Bhutan. ❤

One thought on “Manaslu Basecamp Trek”

Fun Saturday with the @cpocotillo team at the
Seven years of being married to my best friend!!!! 💕Congrats to us @seanbgavin I couldn’t ask for a better adventure partner
Watching flying sockeye salmon and the brown bears who catch them make this whole journey worth it. Although if I could do it again I’d do it differently.
And here are some bears fishing and eating at Brooks!!!
Follow It's a Gavination on WordPress.com
Loading Comments...
%d bloggers like this: