When Sean and I first began traveling in June 2015, I remember saying aloud that I wanted to spend some time volunteering on one of the Worldwide Opportunities on Organic Farms (WWOOF) farms. This is an educational and cultural exchange program where WWOOFers spend half a day on farms and receive educational opportunities, room, and board from their hosts. For whatever reason, we didn’t actually WWOOF until now. It seemed like the perfect idea to save some money on housing, give back to the community, and learn about where our food comes from.

I started researching food about five years ago, maybe a little bit longer, in an effort to eat healthier. I had a friend that was Vegan and I really had no idea what that was, so I asked some questions and learned that it was a lifestyle choice, not just a food decision. On my research path, I watched a lot of documentaries about food Fat Sick and Nearly Dead, Fat Sick and Nearly Dead 2, Vegucated, Forks Over Knives, Earthlings, Cowspiracy, Food Inc., In Defense of Food, Hungry For Change, Super Size Me, Fed Up, PlantPure Nation, and recently What The Health. If you binge-watch these, you’ll likely end up mad because they seem outrageous, and in some way they all are, but you’ll also end up with some questions. Like, how much meat do I really eat? Do I need to eat that much meat? Is all meat bad for me? How are animals actually treated? How are animals slaughtered? Are they shown respect, dignity, and gratitude for their sacrifice? Do I need to eat meat at all? What the hell do I eat if I don’t want to eat meat?

It’s clearly overwhelming. Then once you start thinking about vegetables you’ll start questioning things like GMO vs. organic produce, the dirty dozen, estrogen levels in soy, working conditions and pay of the migrant workers who pick our produce, imported produce and international trade agreements. OMG!!!! The level of overwhelming information grows exponentially with every turn. So enough with the research, it was time for us to get out there and see our food chain from the ground up!

We chose to WWOOF at Sugar Camp Farm in Bon Aqua, Tennessee because it was only a days’ drive from Destin, Florida and because it was clear they were passionate about feeding people organic vegetables and pastured lamb. They operate a small family farm about an hour outside of Nashville where they grow 1.5 acres of vegetables and pasture raise ~80 sheep. We arranged to be there for 10-days and work on whatever they needed help with, in exchange for room and board (lunch and dinners). We would stay in their barn room, use the outdoor kitchen and composting farm toilette, and shower in their home.

Our first two days on the farm where really long days, Friday we harvested vegetables for 10 hours (with a long lunch) for the next’s days market. Before dawn, Saturday we loaded the truck and drove to Nashville for the “Fall Festival” farmers market! Not unlike working a booth at a trade show (which we’ve done many times), just another 10 hour day in the books. But neither of us had slept well the previous two nights in the barn. We knew ahead of time that we’d be sleeping on a futon but it turns out we’re too old to sleep on a thin a futon. So after we were finished for the day we went to a motel in the town of Dickson about 30 minutes away from the farm. We would be free to explore the area on Sunday anyway, so we decided to stay in a motel over the weekend and explore Nashville.

Upon reflection over the weekend we realized that we wouldn’t be able to comfortably stay on the farm, so we decided to book a motel for the week and drive back and forth every day. We also made an agreement with the farm to work 7:30-4:30pm every day, because we were volunteering after all and needed to put some boundaries in place. Unfortunately, the workload didn’t really adhere to any schedule and on Tuesday we worked a 15 hour day. That day we were working with their sheep and they would have suffered if we didn’t just put in the extra hours. More about that experience from Sean!

By the end of the week, we were extremely grateful for the lessons we had learned but we were ready to go. So Saturday morning we packed up and drove to Atlanta as we were heading to White Oak Pastures in Bluffton Georgia for an entirely different kind of farm experience. If you’ve ever purchased meat at Whole Foods you’ve probably noticed that they have a step rating. It comes from the Global Animal Partnership’s 5-Step Animal Welfare Rating Program, which was developed with the animal’s welfare as the primary focus. Well, White Oak Pastures has Step 5+ chickens and Step 4 beef – this is a BIG awesome deal! So we wanted to see first hand what that meant for the animals lives and deaths.

We stayed in one of their farm cabins and got to freely roam the property! We met chickens, pigs, and rabbits and saw many of their organic vegetable gardens. We also got a farm tour, led by 5th generation farmer Jody Harris Benoit. It was really moving to meet someone who says their great-great grand-daddy lost everything because “we lost the war” referring to the Civil War. Her great-great grand-daddy was an officer in the war and had to put up his own property as collateral to purchase supplies for his men. So when the South lost the war, he did indeed lose everything.

The tour consisted of going through the more commercial parts of their business and started at their General Store, which serves the entire community. Prior to their store opening the residents of Bluffton would have to drive 15-20 miles for a loaf of bread. After touring the general store, we drove to their USDA approved red meat abattoir (aka Slaughterhouse) which was designed by Dr. Temple Grandin, the internationally recognized authority on humane animal handling and slaughter. What we were allowed to see is the best possible scenario for slaughter at a commercial operation. I had, of course, romanticized this scenario, envisioning that the cows would in some way be thanked for their sacrifice and treated in a way that exudes dignity. What we saw was four very skillful men working in a quiet and efficient manner to kill, behead, skin, disembowel, and disassemble a cow, a process that took only 10-15 minutes per animal. It was violent but controlled and without malice. It was bloody, smelly, and a complete sensory overload. I fought back tears as three female cows were killed in the time we stood and watched from just a few feet away. 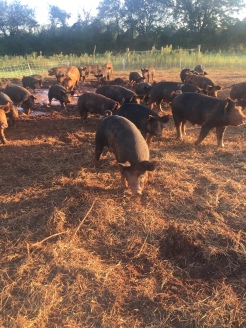 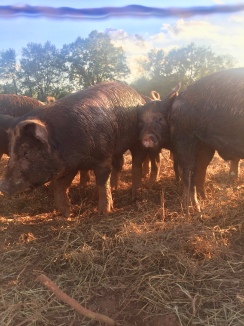 After we left the “kill floor” we saw the area where the cows are kept before they go in. The cows were peacefully and dutifully waiting their turn. They didn’t appear or sound stressed in the least, and they had access to food and water. Right next to the holding area is where blood is collected, and bones are ground to be used as fertilizer. This farm wastes absolutely nothing! Every single part of the animal is used or recycled on the land.

The rest of the tour consisted of visiting their egg operation and poultry abattoir. This farm brings their chickens in at night for slaughter to keep them calm, so we didn’t witness this part but again they have Step 5+ broiler chickens. Meaning they are pastured raised in their natural living environment and they are never transported. This is as good as it gets for the chickens. If you want to see how chickens are humanely slaughtered on a family farm, watch this video.

So what did I learn from this hands-on farming experience? I know now that it is possible to source meat from farms where the animals were humanely raised and slaughtered. But the vast majority of the meat available to American consumers was neither raised nor slaughtered humanely! I also re-learned that supporting the commercial meat industry is not right for me. But if I occasionally choose to eat meat, it will be from a source that raises and slaughters their animals humanely. I also learned that growing organic vegetables isn’t difficult but it is very labor intensive when you’re trying to provide for an entire community.

I’m not sure why we as Americans became so disconnected from our food sources, particularly meat. But I think it’s time we make a very conscious effort to consider the life force and energy we choose to take into our bodies. If we eat animals that were tortured and killed in an inhumane way, not only are we supporting the industry that operates that way, but we are ingesting their pain and stress in the form of hormones like adrenaline and cortisol that will make us sick. Food is medicine, so find the best sources you can!

“Eat food. Not too much. Mostly plants.”
― Michael Pollan, In Defense of Food: An Eater’s Manifesto

4 thoughts on “WWOOFing… where our food comes from”

Thanks to the 19th Amendment to the U.S. Constitution, all American women have the right to vote. So hell yeah #ivoted because our fundamental rights are at stake. If you haven't voted yet, please vote today! #MidtermElectionsMatter #vote
Jed says goodnight
Monday afternoon chores are fun when I’ve got friends like these two to help #ilovedogs #coloradoranchlife #seniorhorses #itsagavination
Our hearts are full and grateful for another fabulous visit with our friends in Sligo, Ireland! Our dearest @avirwin treated @seanbgavin and me to an amazing night of Irish music and dancing with @cherish_the_ladies @gerodonnellmusic A visit we'll never forget 🙏
Follow It's a Gavination on WordPress.com
Loading Comments...
%d bloggers like this: