Zanzibar is a beautiful island, full of exotic spices and cultures. Stone Town is a great city – very walkable and full of great food and entertainment. We stayed in the city for a couple of days before heading to an Air BnB apartment on Kiwengwa Beach Village on the East coast. It’s just South of Matemwe beach and atoll which is one of the “bigger” tourist resort areas. We were excited about having a place with a kitchen but shopping for groceries was a bit of a challenge. 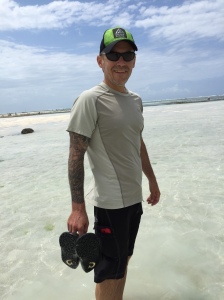 We spent the first day exploring our area, the market (loosely defined), the beach, and our neighborhood. Then we went scuba diving on the Mnemba Atoll. We don’t have an underwater camera, so no pictures but it was pretty awesome. Sadly I got the worst seasickness that I’ve ever had on the boat ride there. I felt the urge to vomit while breathing with a regular in my mouth which made it dicey to say the least, so I only did one dive but it was worth it and loads of fun. Sean did two dives and told me the first was better – so hooray. No underwater vomiting and a good time had by all. Zanzibar Photos.
After having been in East Africa for 3-weeks I grew quite weary of being called Muzungo and being hustled by every street vendor we walked past. And as far a children screaming and hugging me… the novelty wore off and I no longer found it charming but rather invasive.

Why must men on the street and beach hassle every single white person they see? If we wanted to buy cheap crap that we saw in every single town, we’d walk right up to the shop and buy it. I could no longer manage my anxiety while being chased down the street by vendors and hustlers telling me what a great deal they were going to give me, even after we had purchased things. I really just wanted to be left alone.

And why in a country this poor, is it impossible to get an even slightly nutritious vegetarian meal. Rice and potatoes are in the same food group and do not constitute a good or healthy dinner. It felt like as if the only people that had been nice and genuine to us in all of East Africa were taking money from us.

With recent lessons learned under our belt we’ve decided to move on and out of Africa. We need a break from the day-to-day living in a “developing country” so we booked a one-way flight to Munich Germany, where the air is cooler, the beer is good, and water, electricity, trash service, and centralized sewers are a certainty. Why Germany? The mountains were calling! So between rolling blackouts, which meant we didn’t have any running water or way to cook, we booked our flight. We planned to explore little mountain towns in the Alps in hopes of finding a place where we could stop for a few days, do some hiking and enjoy modern living. We didn’t have an itinerary just an idea. Germany and Austria Photos.

One thought on “Zanzibar”

A little something different this afternoon! A bare back ride on my buddy Midnight with my friend John. A real treat for me on a special #tennesseewalker #colorado #ranchlife #bareback #horses #itsagavination
@seanbgavin and I had a chance to jump out of the truck and run in the Mohave National Preserve. At 1.5+million acres it's the third-largest piece of land in the National Park System (lower 48). And it has super interesting geology along the rings loop trail at the "hole in the wall".
@seanbgavin and I were lucky and blessed to see numerous humpback whales while in Cali! If you're in Morro Bay go see the whales with @morrobaywhalewatching
The California Sea Lions in Morro Bay!
Follow It's a Gavination on WordPress.com
Loading Comments...
%d bloggers like this: