The beginning of September brought us many changes. We decided to leave Africa and head to the Austrian Alps with the intention of finding a place to “settle down” for a few months perhaps even the entire winter. Sean and I were both tired of traveling and tired of not “living” the life we wanted. What is the life we want? We made lists, “played the game” as Kit DesLauriers recommends in her book, and found that we both wanted to be in the mountains with good access to skiing, climbing, and mountaineering. All of our short and long terms goals were climbing. So we booked a flight from Zanzibar, Tanzania to Munich, Germany, and rented a car for two weeks. 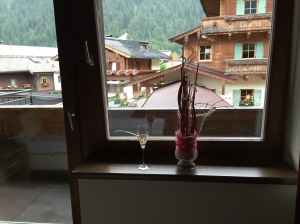 We left Zanzibar on September 4, 2015, and arrived in Germany on September 5, 2015. We grabbed our rental car, drove 2-hours, and checked into a beautiful hotel in the ski-in ski-out mountain town of Waidring Austria. We were greeted with glasses of Prosecco and had a room with a view to kill for. What a relief… we were finally in a place that felt like home the minute we stepped off the plane and where you could brush your teeth with water straight out of the tap. Germany and Austria Photos.

But fate had something else in store for us. Within 20 minutes of being in our room, I connected my laptop to the internet and learned on Facebook that my Dad collapsed while dancing Friday night September 5th, and never regained consciousness. This all happened while we were in transit from Africa to Germany. We had a layover in Hamad International Airport Doha, Qatar on September 4th at midnight local time, boarded 0ur flight to Germany at about 5pm Denver time and my Dad passed away a few hours later at 10pm while we were in the air. By the time we got the message it was 5am Saturday morning in Denver – the entire night had gone by.

When I first read the Facebook post my instinct told me it wasn’t true so I tried desperately to call and FaceTime my Dad. I didn’t have an international cell phone plan so calling was complicated. Suddenly I couldn’t breathe, couldn’t think, and was in a full-blown panic attack. I tried dialing from the screen lock display of my phone and cried for Sean to help me. Within a few minutes, I got my Dad’s girlfriend on FaceTime and was devastated to learn that my Dad really was gone. He collapsed out on the dance floor at the Elk’s Club in Lakewood. I would later learn that he presented with acute heart failure, despite having been to the doctor for a physical that morning and receiving a clean bill of health.

What followed is a blur of badness. Sean and I flew from Germany to Denver as fast as we could but it still took a full 48 hours. In the interim, my Dad’s cornea and skin were donated and he was taken to a mortuary. My half-sister and my Dad’s girlfriend had set-up shop at his house, so we all got very close for a few days once Sean and I arrived. Sean’s parents drove to Denver from Phoenix and supported us with all the love and comfort we needed, but so much of what happened was a blur. I was in shock and having to bear the burden of telling my half-sister who is 20-years my senior that Dad made me the executor of his will. So I found myself managing people, processes, and tasks that all had urgent timelines. 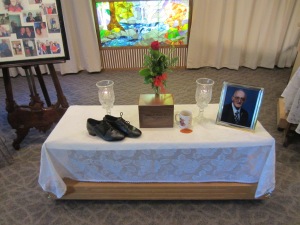 It wasn’t long before I cracked in a melancholy depression of tears and the worst headache of my life. Thankfully Sean, his parents, and his Aunt Mary helped put my pieces back together long enough to get through the funeral. Immediately after the funeral everyone went home, what they took home with them I wasn’t really sure, and I still don’t know, but it honestly doesn’t matter. So my Dad’s funeral was September 11th, we had his house on the market September 27th and sold October 27th.  The work and pain that took place in those 6-weeks left deep scars on me. I’m not sure how people recover from the death of a parent, and in my case, my only parent. I went through huge emotional swings of anger, sadness, guilt, and happiness. The most destructive emotion was of course anger. Anger at the problems I had to solve and the processes I had to manage to sell his home. Near the end, I could not walk into the garage without having a full blow break-down of tears and collapsing onto the floor. I was miserable and sad beyond words.

With two weeks left before we closed on the house, we learned that Sean’s Dad had bladder and possibly prostate cancer. So we quickly pivoted, wrapped up as much of my Dad’s estate as we could and we took off to Phoenix to be with Sean’s parents. What we’ve learned is that his prognosis is better than we expected but there’s still a long road of fighting cancer ahead.

So for the second time in 6-months, we moved everything we own from a storage unit in Denver to a storage unit in Durango, so that we can live in Telluride Colorado for the next 9-months. We are beyond excited but so much has happened that it feels a bit like our trip ended. We are so lucky to have had the time to spend on my Dad’s estate and Sean’s family. We are blessed and fortunate to be living our lives on our terms again. We are back to the place where, if we don’t like what’s happening, we stop and change it.

Now that we are comfortably relaxing in our new condo, I’m finally realizing that within a short 9-month period I lost the two most stable and reliable relationships of my life, my beloved dog Jasmine and my Dad. Grief is a terribly long ride that doesn’t ever seem to end. Losing my Dad has changed me in a couple of ways that I am only beginning to recognize. I never shut my phone off anymore if I am within cell phone range because the last time I missed a call it was the notification that my Dad passed away. I am more open to telling people that I love them, especially with goodbyes. And I cry more now, which makes me feel weak and guilty. I feel ashamed to grieve and have no idea why. 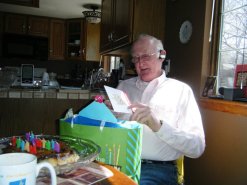 I catch myself wishing that I could call my Dad to get much-needed advice and hear his cheerful voice. Most of all I wish that I could just hold his hand one last time and tell him how much I love him. I know that he knew but I wish more than anything that I could have one last minute with him.

It’s the lack of relationship that I miss both with my Dad and Jaz. Having other “parents’” in my life just doesn’t provide the same level of comfort and security. The same for dogs. There are many other dogs that I love spending time with but none that I have a relationship with which seems so strange.

So I find myself bouncing back and forth between relaxed joy and active grieving. And often, I feel after the fact guilt, for the relaxed joy. What an emotional ride I’m on.

We’ve made huge adjustments in our lifestyle so that we can live purposefully. Our purpose is to take advantage of the time we have on this earth, while we are physically capable and do the things that challenge and inspire us. There’s no guarantee that you’ll feel as good tomorrow as you do today, so get the most out of every day. We are mid-life retired or self-sponsored athletes, spending every day outside “training” for our next big adventure. However you want to couch it, it’s awesome, it’s inspired, it’s courageous and we love it.